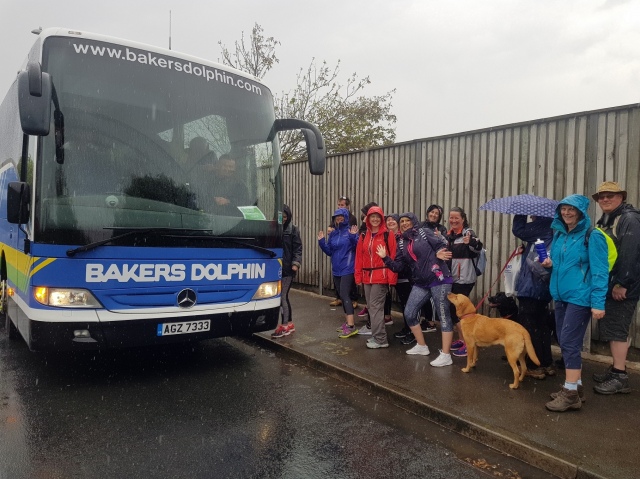 A convoy of coaches from Bakers Dolphin ensured fleet-footed walkers got the best possible start to a massive fund-raising effort on the Mendip Hills.
A fleet of the firm’s coaches took hundreds of people to their starting points for the annual Weston Hospicecare Mendip Challenge.
It’s the second year running that Bakers Dolphin has supported the event, which saw nearly 1,100 people tackle 10, 20 and 30-mile treks over the Mendip Hills – 221 more than last year.
While the amount raised is still being added up, organisers are confident they can beat last year’s amazing total of £66,000.
Six full-size Bakers Dolphin coaches shuttled walkers to the start of the 30-mile walk; there were seven coach-loads for the start of the 20-mile walk and 13 for the start of the shorter event.
The event is the charity’s annual flagship fundraiser and raises tens of thousands of pounds towards its vital work providing palliative care for people living with life-limiting illnesses in Weston-super-Mare and surrounding areas.
Individuals, teams, families and their dogs all stepped out to do their bit for the very worthy cause in what was an extra-special Mendip Challenge this year, as the charity celebrates its 30th anniversary.
Bakers Dolphin Sales and Marketing Director, Amanda Harrington, said: “This is the second year running that we have supported this event, which we’re delighted to be involved with.
“Our staff told us that they thoroughly enjoyed being immersed in the amazing atmosphere surrounding the event last year, when we first got involved, so we didn’t hesitate to get involved again and play our part in what was an outstanding effort for all involved.
“The wet weather certainly didn’t dampen the spirits of those taking part and, if anything, was probably a little more suitable for walking many miles than last year, which was extremely hot and sunny.”
Simon Angear, event organiser, said: “I would like to thank Bakers Dolphin for the super job they did at this year’s Weston Hospicecare’s Mendip Challenge.
“The event was a big success for us, with some terrific participant numbers, and the organisation and professionalism of Bakers Dolphin was a big part in helping the early part of the day run smoothly.
“I’d like to single out driver Richard Simpkins for particular praise; just as last year, he was a huge help.
“He communicates clearly, deals brilliantly with the public and is happy to put himself out to make sure things go well.
“He’s an enormous asset to Bakers Dolphin and a pleasure to deal with.”