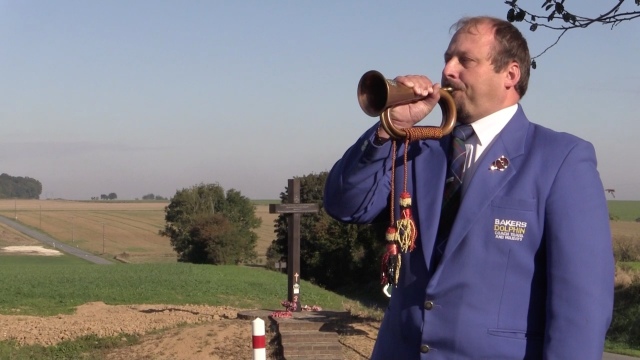 A West Country coach driver paid a poignant tribute to volunteer soldiers from Bristol who lost their lives 100 years ago on the Western Front by playing the Last Post at a special memorial in France.

Michael Blowers, who was the driver on a Bakers Dolphin tour of Belgium and France following in the footsteps of Bristol soldiers, played the Last Post twice during the trip at locations where local soldiers lost their lives.

He secretly brought along a trumpet to play at Lancashire Cottage Cemetery where Bristol Territorials are buried and local historian Clive Burlton then produced an original Gloucestershire Regiment bugle from the First World War.

Driver Michael, who had never before played a bugle, practiced with the historic instrument overnight then used it to play the Last Post and Reveille at the Bristol’s Own Cross in Longueval where the volunteers from Bristol fought and died in 1916.

Michael Blowers said: “It was very moving to play at that spot using an instrument from the period with a group of people, many of whom were descendants from Bristol soldiers. I have never played the Last Post on a bugle before as the trumpet is my instrument, but despite its age it produced a good clear note.”

The Bristol On The Western Front four-day tour was guided by military historian Jeremy Banning and local historian Clive Burlton, who brought he bugle along as a prop for a talk. Most of the men who lost their lives at Longueval has volunteered at Bristol’s Colston Hall months before.

The memorial cross in their memory was erected in 1920 but then lost in the Second World War. A replacement was unveiled in 1986 and stands on cobbles brought from a Bristol street.

Bakers Dolphin, Sales and Marketing Manager Amanda Harrington, said: “Michael has played the Last Post at a number of our customer reunions around Remembrance Day. He is always willing to get involved and do a little extra to make a trip special.”