Location lovers follow in the footsteps of their screen heroes 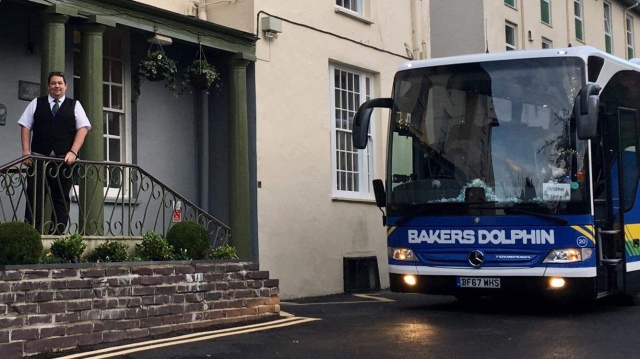 High-profile feature films and TV programmes are prompting a surge of ‘location lovers’ wanting to visit Wales.
Bakers Dolphin says an increasing number of people have been keen to experience the wonders of Wales, as captured on TV and film cameras.
Sales and Marketing Director Amanda Harrington said: “You can’t beat North Wales for glorious scenery.
“Films like Guy Ritchie's 'King Arthur', and the S4C series ‘Hidden’, which were shot in Snowdonia, are attracting a whole new audience of coach trippers.
“What’s more, it’s become a year-round destination and with a growing global reputation for adventure attractions such as Surf Snowdonia and Zip World.”
One location proving particularly popular is the Royal Victoria Hotel in Llanberis, set in 30 acres of gardens between two lakes at the foot of Snowdon, just steps away from the scenic Snowdon Mountain Railway and 15 minutes from the ‘North Wales Expressway’
Hotel Manager Steve Lee said popular productions such as ‘Journey’s End’, ‘Requiem’, ‘Britannia’ and ‘Keeping Faith’ are all helping to boost the local economy.
He said: “We’re getting a lot of ‘first-timers’ who may have seen the region on their favourite TV show and want to walk in the footsteps of their TV favourites and experience first-hand the stunning landscape they have seen on screen.
“Places like Snowdonia have always been popular for their dramatic beauty, but there is now a whole new audience coming here and discovering it for themselves.
“It’s no coincidence Wales is so popular with film crews because it's got everything, as everyone lucky enough to live here knows, – with mountains, lakes, beaches and forests all in easy reach.”
Steve says ‘location lovers’ now make up a growing percentage of Royal Victoria guests, alongside the regular hill walkers, triathletes and railway enthusiasts.
The 104-room three-star hotel, that recently underwent a £1m refurbishment, was built in 1830 and named after Queen Victoria whose family stayed there in 1832.
In 2017, the Lonely Planet placed North Wales fourth in in the publisher’s annual Best in Travel list as one of the top five places in the world to visit, the only UK destination to be featured in its rankings.
Tourism is estimated to be worth more than £5 billion to Wales as a whole.
Based in Weston-super-Mare, Bakers Dolphin celebrates its 130th anniversary in 2019, and specialises in short breaks, UK and continental holidays, day trips and theatre visits.
The company offers five-day trips to Snowdonia with accommodation at the Royal Victoria Hotel from May until the end of September with visits to Caernarfon, Anglesey, and Portmeirion and a ride of the Ffestiniog Mountain Railway.
Amanda added: “Excursions and activities which many other operators offer as optional extras, for additional costs, are all included within the price of Bakers Dolphin tours, which make our offers extremely good value for money.”