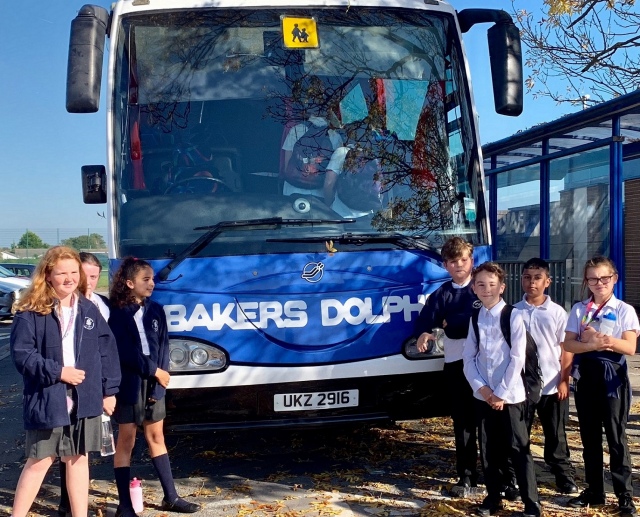 Children from a Weston-super-Mare primary school were left asking for ‘more’ after being transported across town to enjoy a VIP performance of ‘Oliver’.

One of the country’s top coach tour operators, Bakers Dolphin, which is based in the South West resort, provided a free coach to enable a party of 90 children, and nine members of staff, from Ashcombe Primary School to enjoy the special day out.

They were taken to Worle Community School (WCSA) for a special VIP performance by its students of the popular musical Oliver, and lunch.

The group from Ashcombe School then got to work alongside Worle’s young journalists, interviewing cast members for articles to go into their school publications and local media.

WCSA is home to a Jill Dando News Centre, which was launched last year in honour of the popular BBC news reader and presenter, who was a former student at the school.

Head of Drama at WSCA, Becky Davies, said: “There has been huge talent, energy and enthusiasm from the students for this show and the performances have been incredible.

“Many thanks to Bakers Dolphin for their help in bringing over all the children from Ashcombe to mix with our students on the cast and in the journalism.”

Amanda Harrington, Sales & Marketing Director of Bakers Dolphin, said: “It was a pleasure to be able to give the children from Ashcombe School the opportunity to watch a performance of the show and then see how the News Centre journalists work.

“Judging by their reactions on the way back to their school afterwards, they certainly enjoyed the experience and we’re pleased to have played our part in helping to give them a memorable day out.”

John Clark, Headtacher of Ashcombe Primary School, said: “I’d like to say a big thank you to Bakers Dolphin for their support and generosity.

“This sort of gesture makes and enormous difference to cash-strapped schools.”