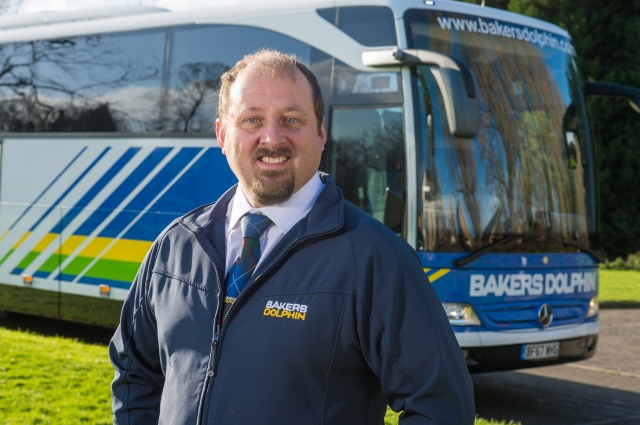 Bakers Dolphin, based in Weston-super-Mare, is launching its own coach driver training school which it hopes will encourage more people to consider a career behind the wheel.

The man spearheading the training is Michael Blowers, newly-crowned national Coach Tour Driver of the Year – so candidates know they will be learning from one of the very best in the business.

As an added incentive, Bakers Dolphin will fund the training required for drivers to earn their PCV (passenger-carrying vehicle) licence.

Research has shown that a key reason behind the driver shortage is an ageing workforce - there are not enough new drivers coming on board to replace those who are retiring or moving to other careers - with younger candidates being put off by the cost of acquiring a PCV driving licence and the Driver Certificate of Professional Competence (Driver CPC). A PCV driving licence has mandatory CPC requirement.

Bakers Dolphin hopes that setting up the training school, which will run in North Somerset, and funding the costs of gaining the PCV, which is highly valued by employers, will prove to be just the ticket to attract new recruits to the profession.

And the firm feels these awards position it as the ideal business for training the next generation of drivers.

Michael Blowers has now been appointed to the position of Training Co-ordinator at Bakers Dolphin. He joined the firm in May 2008 after discovering a love for coach driving while working as a driving instructor.

He said: “Being a coach driver is an absolutely fascinating job where no two days are the same. It really suits someone who loves driving, and loves getting on with people.

“There’s a huge variety of work, from school contract jobs through to UK tours and European tours, including driving our superb, top-of-the-range coaches.

“Bakers Dolphin always tries to put people on the work that suits the individual driver, and I personally love the UK tour work.”

“The very best part of the job is meeting and dealing with the customers, and doing whatever I can to ensure they have a great day out or holiday, which starts from the moment they step on board the vehicle.”

Michael said he was excited by his new role in helping to train and develop the next generation of drivers.

“I hope the fact that Bakers Dolphin is willing to pay to put drivers through their training, so that they can get the highly valued PCV licence, will encourage many more people to consider a career as a coach driver.

“If you’re a people person, it really is a very enjoyable way to earn a living, and promises many miles of smiles.”

Max Fletcher, Managing Director of Bakers Dolphin, said: “The industry has struggled with a national shortage of drivers for some years now, so we decided to try to actively do something positive about it.”

“Hopefully a combination of us funding the training, together with an opportunity for people to learn from one of the best drivers in the business, will inspire them to consider coach driving as a career.”

Bakers Dolphin offers hundreds of holiday tours around the UK and the continent. It also provides regular daily coach services for schools in the region as well as private hire vehicles. It currently has vacancies for coach and bus drivers and is willing to offer flexible, full or part-time employment to fit in with candidate’s needs.

If you are interested in becoming a Bakers Dolphin coach driver please contact Derek Forbes on 01934 415000. For more information on Bakers Dolphin visit www.bakersdolphin.com