The 'Baker Story' began in 1889, when Charles Theodore Baker, aged 21, borrowed £25 from his elder brother and set up business in Weston-super-Mare with a pony chair for hire.

The business prospered and he was soon able to buy additional horses and cabs, stabling them behind a house at 38 Locking Road - still the firm’s headquarters today.

The early 1900s were busy years with the company providing coachmen, horses and Broughams to all the residents of Weston. He won the Royal Mail contract to deliver the post by horse-and-cab twice daily from Weston to the Cheddar Valley.

Horses and carriages were also provided for local Funeral Directors. Single or double-horse Broughams were available and a first, second or third class funeral was offered to reflect the social status of the deceased.

The whole business continued to expand until 1914 when the First World War saw most of Charles’ horses commandeered or purchased by the Army for military use - not to be returned for four long years. 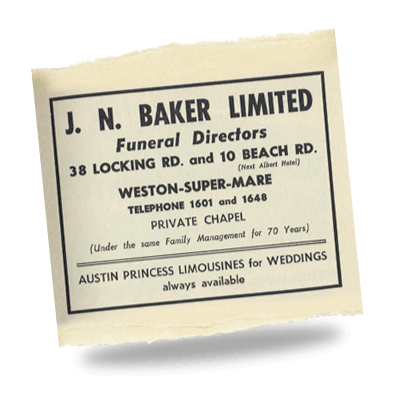 Charles bought two motor coaches in 1923 – painting them Pillar Box Red, to match his Royal Mail fleet. The very first motorised leisure trips took to the roads of the West Country – the charabanc trip with 20 passengers and a top speed of 25 mph proved popular.

Story behind the photo

An outing from Locking Road Methodist Church Sunday school to Salthouse Fields, Clevedon, in 1923, Charles was a member of the congregation. 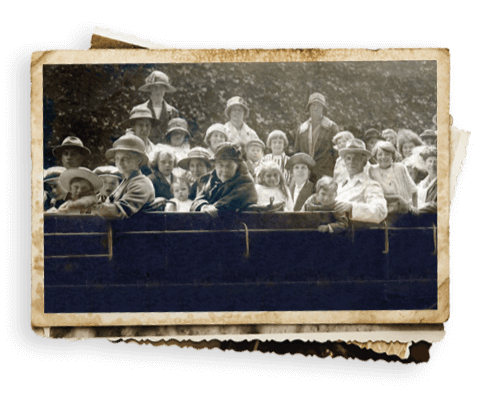 In 1930 Charles Baker’s son John Baker - known to everyone as Jack - joined the business - and the firm became Charles T. Baker & Son. A sea front booking office opened at 16 Beach Road, but plans to launch a programme of Sightseeing Tours for holidaymakers had to be put on hold when in 1939 the world went to war. 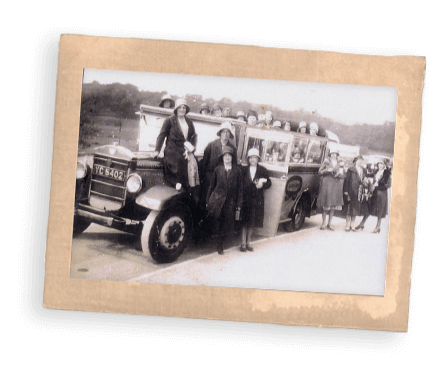 During the Second World war, Jack Baker found his coaches contracted out to British Empire Airways (later to be known as BOAC and, later still, as British Airways), transporting air crews around Britain. This was to last for the duration of the War and the fleet grew from just 12 to nearly 30 by War’s end.

In the 1940s, the firm’s fleet of coaches were affectionately known throughout the region as “Weston Greys”, after their distinctive grey and blue livery.

Story behind the photo

A postcard advertising its first programme of day trips from Weston-super-Mare’s sea front. 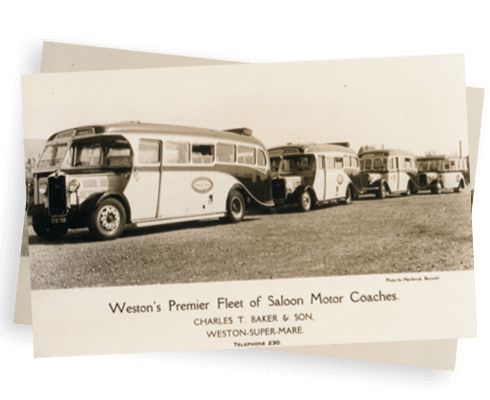 In 1952, Charles Theodore Baker died at the age of 83 and Jack’s wife Mary joined her husband as a director. They had five children, all of whom became shareholders, and some directors in the family business.

Under Jack’s direction, the company expanded steadily, buying the Weston branch of Bristol’s largest coach operator, Wessex, in 1952, and a modern coach station was built at 10 Beach Road. 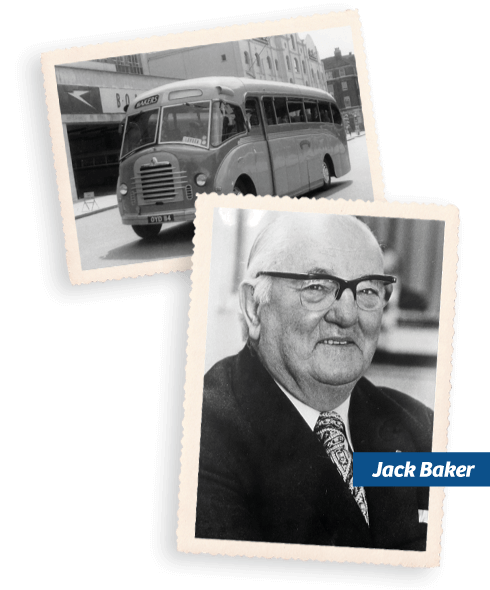 In April 1959, the Company became J.N. Baker Ltd. Expansion during the 1960s was helped hugely by the growth of the motorway network in Britain. People switched from train to coach travel, as journey times were dramatically reduced and coaches were more comfortable. The building of the Severn Bridge further boosted the company's income, and sightseeing tours were organised throughout its construction.

The Day Trip programme grew and longer summer holiday tours to Scotland, Wales and Ireland were introduced for the first time. 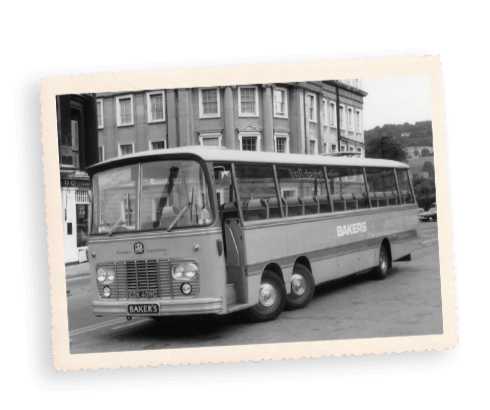 Brothers Bob and John Baker expanded the business throughout the 1970s with an increasing number of destinations for holidaymakers to choose from in the brochure.

Bob Baker had been the first of the five children to join the Company in 1961 after graduating from London University with a BSc degree in Engineering. His younger brother John, who graduated from the University of Wales with a BA degree in 1966, joined him; both became directors of J.N. Baker Ltd. in 1968.

Under Bob and John, the company continued its expansion into the 1980s. In November 1981 Bakers acquired their major competitor in the West, Wems Coaches, increasing the fleet to 77 vehicles. 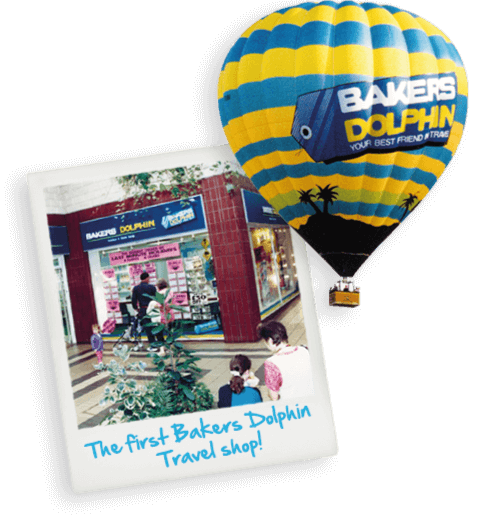 In 1998 First Choice Holidays bought the travel shops and Bakers Dolphin Coach Travel went back to its roots as one of the largest privately-owned coach companies in Britain.

The London Flyer, regular service between Bristol and London, continued to provide a cost-effective link to the capital for shoppers and business people. Theatre trips to musicals in London became increasingly popular and the coach hire division expanded providing transport to customers ranging from some of Britain’s leading blue-chip companies and tour operators to local primary schools and social groups.

In 2005 the Gold Service was introduced, the ultimate in comfort and safety. The ultra-luxurious Gold Service coaches spearhead Bakers Dolphin drive to stay at the forefront of the UK coach tour industry.

The trio of Gold Coaches carry just 36 passengers, each in reclining leather seats with a rear saloon and with on-board hostess service. The coaches are in constant demand and are used on premier Continental and UK holiday tours. 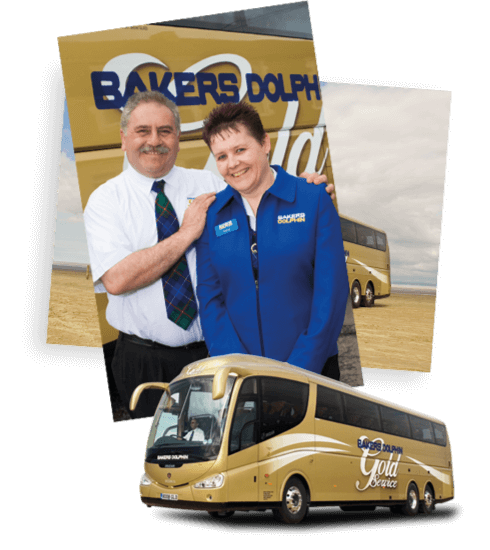 Celebrating our 130th anniversary with a fleet of over 70 coaches including 5 luxury GOLD coaches. Our retail outlet within the Sovereign Centre celebrated in February its 10th birthday.